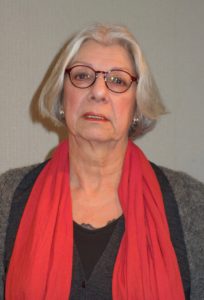 Marjolijn Grool is independent researcher in the field of linguistics and ethnography since 2005. She studied French Literature, Linguistics and Discourse Studies. She obtained her PHD in linguistics with an analysis of the performance of voodoo stories in 2013. From 1982 she was consultant in the field of communication and interim-manager. She was politically active in her hometown and in a leading political party in the nineties.

Her publications under the name Marjolijn Aalders Grool include a volume with the integral text of 37 Voodoo stories (2014), preceded by an analysis of the performance of the Voodoo storytellers (2013). In her latest book (2017), she describes her fieldwork in the context of the foundation of the Peoples Republic of Benin and its ruthless oppression of the Voodoo Religion.

She chairs the Verbal Art Foundation, a foundation she founded in 2009. The foundation aims at collecting and preserving of endangered cultural heritage.
Marjolijn Grool is married and lives in The Netherlands.