In her most recent book, she describes not only her fieldwork but also the social and political events of that time. In this way, she is following the German-American anthropologist Franz Boaz and others who, in addition to the research results, also describe their anthropological fieldwork and place it in a much broader perspective. 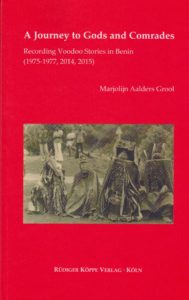 Benin was involved in a transition from a French colony to a modern state, based on the Marxist Leninist ideology. The regime, which came to power through a coup in 1972, began to impose reforms. Local religions such as voodoo were conserved to be an obstacle to the further development of the country. So those religions had to disappear.

She describes her fieldwork and the welcoming reception in the villages, the political machinations and the ruthless oppression of the voodoo religion. With the mercenary attack of Bob Denard in January 1977 she was literally lying under fire. But she also writes about the social isolation of the few foreigners who eventually lived there, and how they coped with it. These descriptions come not only from the notes of her fieldwork, but also from letters to her mother, who never threw away her letters, from diaries and from newspaper and magazine articles from Benin from those years.

In 2014 and 2015 she travelled again to Benin, this time to give back to the country and its people the cultural heritage that had been entrusted to her, the voodoo stories. It also enabled her to make a comparison with the past. In ‘A Journey to Gods and Comrades’ she makes a comparison with the past and tries to find an answer to questions as ‘How did Voodoo survive the witch hunt?”  and “Is the sophisticated art of performing voodoo stories still alive?”

A fascinating eyewitness account of the recent history of a West African country.
See also https://koeppe.de/titel_a-journey-to-gods-and-comrades