In 1976, I recorded 37 Vodun stories in the south of Benin. The stories go back to the culture and religion of the former Kingdom of Danxome in southern Benin, West Africa. Most of the narrators in 1976 were over seventy and the majority were women. All the narrators were illiterate. The stories were told in a family setting to an audience of children and adults. These recordings are probably the oldest audio recordings of traditional Hwenuxo stories. The text of these performances was published in 2014 as ‘Vodun stories of the Fon (Benin)’. The full Fongbe text is printed on the left page, the translation in English on the right page. The stories are preceded by an introduction that summarizes the history of Benin and highlights the main cultural aspects of the Fon culture. 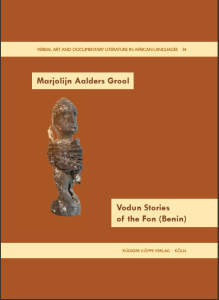 Hwènùxó stories are told to teach the children (and the adults) the culture and the voodoo religion of the Fon people and the do’s and don’ts that go along with it. The basic topic of the stories is the diviner’s consultation of the ‘guardian spirit’ through Fa. All stories stage one central participant and a pair of agents. The central participant has divine properties. The agents are figures that have one ore more well defined properties that refer to one of the Fa. The corpus consists of dramatic and comic stories.

The stories are preceded by an introductory part that gives the historical and ethnographic background of the stories as well as their religious meaning. Furthermore, it discusses the way the performers structure the narrative discourse of hwènùxó as well as the language usage, the underlying meaning and the elements that are used in creating the story. Moreover, the introduction elaborates on the procedure of collecting the corpus, the context of the performances and the process of transcription and translation.