In  ‘Verbal Art of the Fon (Benin)’ I present a thorough analysis of the performance of  thirtyseven stories that I collected in three villages in the south of Benin in 1976 and 1977. The total duration of the corpus is over 300 minutes and comprises  57.000 words in Fongbe . The stories aim at children’s education. 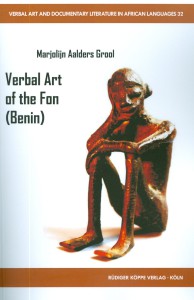 Nine stories in this corpus are similar, although told by different performers in different villages. These stories stage an identical topic, central participant and a pair of agents. However, the plot is different. The analyses give insight in the degree of improvisation. The corpus consists of dramatic and comic stories. The basic topic of the stories is the diviner’s consultation of the ‘guardian spirit’ through Fa.
The statistical analyses of the narrative discourse show a constant speech rate, with the exception of rhetorical highlights and songs. The graphics show that the performers use a pattern of pauses that functions as content marker. The performers use a single particle as the clause-final topic as well as a definite marker of a noun.

The framework of the story is rudimentary, although several grammatical functions, lexical markers and rhetorical phenomena obligatorily convey parts of the plot. On the other hand, the performer uses the storyboard technique to structure the performance.
The storytellers are highly skilled performers, their performance is an art.